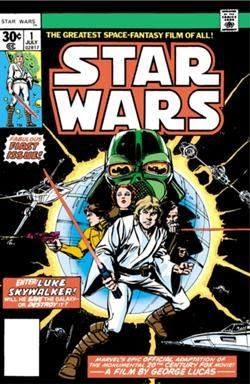 In the summer of 1975, I was working on the Universal lot for Alfred Hitchcock when I ran into George Lucas and Gary Kurtz. They told me about their new project they were starting up at Fox, and asked me if I'd be interested in reading the script. "Sure," I said, I'd love to read it. And I loved it. I loved it so much I wanted to work with George and Gary on Star Wars. I met with George to talk about our ideas of marketing and merchandising the film. We both loved comics, science fiction and toys, so it was easy for us to come to a mutual understanding that we'd work together using comics and toys to promote the film.

I had other projects to tie up before I could begin working on Star Wars, so it was several months after our initial meeting that I finally started working. George and Gary had received a go-ahead from Laddie so they left to begin pre-production. I was left with free rein to market and promote Star Wars the way I deemed best.

From the very begining, it was my intention to market Star Wars using comics. The reason why is very simple - its the same audience. That's a no-brainer today, when Comic-Con is used to premier a lot of Hollywood product, but in 1976, films weren't marketed that way. Basically, films were conventionally marketed through ads in newspapers, radio and TV spots.

In the 70's, the best news stand in Los Angeles was World Books and News on Cahuenga. I went there regularly to buy comics, magazines and newspapers. I got to know one of the guys there, Larry (think he was one of the owners), who would look out for things which might interest me. World Books and News was one of the few places in LA you could get stuff like international magazines and underground comics. Larry saved Star Reach's first issue for me. The cover was by Jim Starlin but Chaykin had a 16 page Cody Starbuck's story. The moment I read it, I loved Cody Starbuck.

I don't think I showed George the Cody Starbucks at our initial meeting at the Black Tower on the Universal lot, but by the time George left to start pre-production in the UK, he agreed with me. We wanted Chaykin to do the comics. Cody Starbucks was a swashbuckling figure like you might have had in a Three Musketeers strip but very contemporary. Although he had a sword, Cody was drawn in such a way you knew he could also handle a gun or lightsaber. He was not stuck with a period look, which is what we needed for Star Wars. We had to have characters which were drawn in such a way they transcended time and space. They had to be characters which the readers would accept.

We also decided to go with Marvel, and not DC Comics. I had met Jeannete Kahn, who ran DC, but felt they were not on the cutting edge. This was because DC was as not as aggressive a company as Marvel. Marvel had come out with Conan and other characters which we felt were in line with what we wanted to do with a Star Wars comic series. DC had one guy there who was a great historian that I really liked, but as a whole, they were too staid a company. Roy Thomas had been the editor at Marvel and had done a terrific job expanding their character lineup by bringing in characters from pulp fiction, including the great Robert E. Howard's Conan, King Kull, and Solomon Kane. Marvel's aggressive expansion of characters was important because we needed to be with a company who was actively building a science fiction base.

That's the background of the decision to go with Chaykin and Marvel.

With George and Gary in the UK, I was busy copyrighting STAR WARS property and putting together the presentation for Fox's Board of Directors meeting to get more money into our revised production budget. This was the legendary Fox's Board of Director's meeting where Board members confused the title Star Wars with movie stars battling. I then did the presentation at Fox's Exhibitors' convention, the "26 for 76" meeting. A few days later, I went to New York and did the same presentation for Fox's New York offices. After that presentation to the New York office, Marc Pevers and I went to New York's International Toy Fair.

I used the hotel's phone book and found Marvel's number. I tried calling Marvel cold to see if I could get a meeting with Stan Lee. I couldn't. No, Stan Lee didn't have any appointments free that day, the next day or even next week. So what was I going to do? How was I going to get in? Ah, Ed Summer, George's partner in Supersnipe. Ed had comic book connections, why not use them? Duh... So I called Ed to see if he could arrange a meeting with Roy Thomas, who had been the editor at Marvel previously. I knew Roy would knows the ins and outs of getting into Marvel.

Sure enough, Ed knew Roy and set up a meeting that evening. We went to Roy's house and I pitched him the star wars comic books. Roy loved it. Roy wanted to be involved! Great! I mean, Roy was a legend! It would be a phenomenal team -- Roy writing and Chaykin drawing. the two would do a great comic book. Roy then set up a meeting with Stan. See, what this proves is that there's more ways than one to get into a door. I mean, in LA it's legendary that writers try everything from throwing scripts over a producer's fence so it lands next to them sunbathing by the pool to getting to know an actor's hairdresser. I was going to use every possible connection to get an in to meeting Marvel.

The meeting. Stan Lee and Eddie Shukin, business manager for Marvel, were there as Roy pitched the project. I stepped in, telling them the number of comic books I wanted to do, when I wanted to have them out, and how I would promote the comicbooks. Besides the typical publicity route, I would arrange for us to get put on San Diego's 1976 Comic-Con's schedule, and even bring Roy and Howard out for a presentation. We would do a Chaykin poster that would be sold for a minimal fees to give the fans something they could take away with them until the comic book came out. While the idea of getting fans reved up and interested in Marvel's Star Wars Comics thrilled Stan and Shuykin, what excited them even more was they weren't going to have to spend a penny licensing the comics. We were giving them the rights free. And to top it off, we would not only give them the first 5 issues free, they wouldn't have to spend a nickle promoting it. We would foot the bill, from Comic-con to ads. This was an offer Marvel couldn't refuse.

At the time, I didn't know Marvel Comics was in financial trouble. It wouldn't have mattered, because Marvel and DC were still at the top of their game. We needed the comic books to get to our market, and both these companies had their distribution channels set up so we could reach our market. It was worth giving away stuff FREE to get a foothold into the market because we would be reacing our audience.

After my meeting with Stan and our coming to an agreement for the first 5 books being free, with payment on the 6th, Marc Pevers then took over the legal contracts.

Marc Pevers was Fox's representative and an attorney who negotiated licensing deal with me. I represented Star Wars. Marc, 20th Century. The two of us had gone to the Toy Fair to license Star Wars and after the Toy Fair, Marc had gone back to Los Angeles while I stayed trying to lock down the Marvel deal. There were people in Fox's marketing department who really thoght I was wasting my time staying in New York to meet with Marvel. They truly believed comic books were not worth the effort -- and thought I was nuts for giving away the rights. They could not see tie-in the between comic book audiences and Star War audiences, nor did they realize that by giving away the first 5 free, we'd have out market build for the 6th and beyond.

To conclude this section of the MARVEL STAR WARS COMICS, I'll conclude by saying that contrary to rumors, STAR WARS merchandising contracts weren't made with a handshake and $50. The Marvel licensing deal was hashed out by Marc Pevers and Marvel's attorneys, then signed by George. All details were negotiated, then finalized in print, with both parties signing the contracts.
Posted by John Scoleri at 2:17 PM 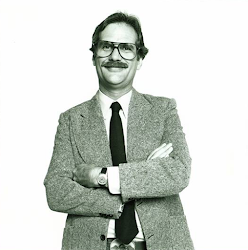